Most Triumph customs tend to be firmly rooted in the past, being retro throwbacks with varying degrees of success. So it’s good to see a builder capture the sporting spirit of Triumph in a thoroughly contemporary way. ‘Weslake’ is based on a T509-spec Speed Triple (108 hp, aluminum frame, twin headlamps) and was built by Olivi Motori, a Triumph dealer from Florence in Italy. It won the ‘Best Naked’ category in last year’s Verona motorcycle expo. Most of the custom components are from Triumph’s own parts bin, including the beautifully balanced tail section—a modified Thruxton item—and the back wheel, which is from a Speed Triple 1050.

The ‘Weslake’ moniker is a reference to the English tuning specialist Weslake Engineering, famed for its Gurney-Weslake cylinder heads. Founder Harry Weslake was also an accomplished motorcycle tuner, and his straight-four motor for the 1958 Vanwall F1 car was inspired by the design of Norton singles. Weslake 8-valve heads were often fitted to Triumph motors in the early days of Tritons, and that’s where the connection comes from. 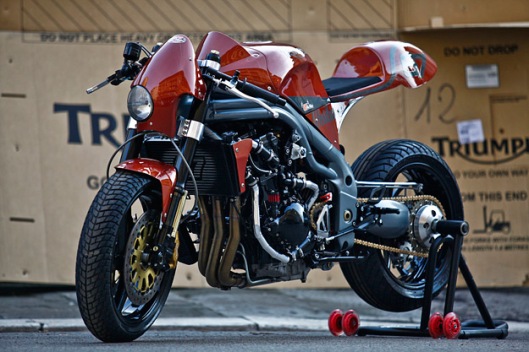 The Speed Triple has always been recognisable by its oddball twin ‘bug eye’ headlamps, and Olivi Motori has continued the tradition of unusual front ends. But in this case, it’s a compact single light set off-center in the bikini fairing. It’s not a conventional type of beauty, but it’s certainly striking—a fitting face for a very classy custom. 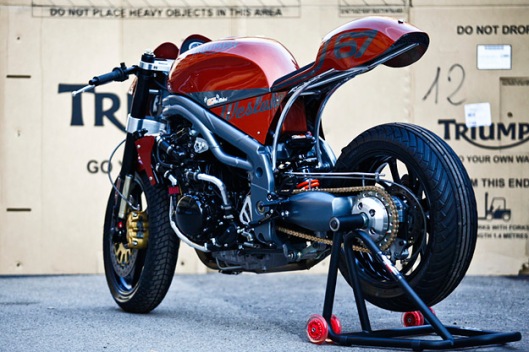